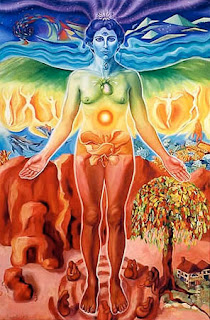 The chakras in the psycho-physical human body at the dormant state form a complex intertwined structures, called Granthis, or knots, as they are "link" matter and spirit, enhancing the sense of ego. There are three main granthis in the human body, which make the trinity of Brahma, Vishnu and Shiva respectively, and they are called Brahma Granthi, Vishnu Granthi and Rudra Granthi.
In any practice to achieve success in the process of Kundalini awakening it is important to open these psychic knots. However, it is quite difficult because granthis inextricably connected with all that we are accustomed to thinking of our personality, our habits, qualities, desires. Three granthis together constitute the unconscious complexes (samskara) woven by illusion, and the weight and rigidity of the past is a strong opposition to the passage of spiritual power.

Brahma Granthi is the first major block that sadhaka need to transcend. This granthi keeps a person under the illusion of the material benefits, physical pleasures, lethargy, ignorance and uncertainty.
Among all the most powerful is an illusion of physical pleasure. This granthi plays an important role, because it is responsible for the material man's thinking. It creates a kind of attraction in the nature of the human mind. Illusions that are created by Brahma Granthi, may be represented as:
• Permanent sexual thoughts and sexual activity
• Permanent hunger, which is difficult to satisfy
• Need of money, land and other tangible things


The opening of this knot may also be due to some problems for the sadhaka, because it causes a strong increase of fever, a very strong desire of sexual satisfaction and a strong motivation for the material desires.
The work of this granthi associated with three major chakras - Muladhara chakra, Svadhishthana chakra and Manipur chakra.

Vishnu Granthi is the other main knot, which adds the barriers for the sadhaka. This granthi keeps a person immersed in the attachment, emotional bondage, internal mental ignorance. it leads to selfishness and to the concept of the higher ego. This ego is so powerful that it keeps a person tied to the level of achievement and does not allow him to progress beyond this. Most sadhakas faced with the problem of ego and attachment.
Emotional attachment and other illusions that are created by this granthi may eventually expressed as:
• Attachment to family members, relatives, friends, society, state, country, world, etc.
• Attachment to material benefits and profits.
• Need of more siddhis and riddhis.

In the process of the opening of the Vishnu Granthi sadhaka may face obstacles such as a strong passion, ambition, power of the siddhis and riddhis leading to the mental death of a person. Sadhaka can become entangled in so many newfound powers, he begins to think that this is the limit, and he is only the Almighty Shiva and Devi Shakti. These people are limited on this level of development, then this could lead to the destruction of their sattvic acts and to the general spiritual decline.
This granthi actually checks the level of the true seeker of knowledge in the sphere of material and spiritual. At a time when the granthi fully opened, unleashed, the sadhaka becomes a true incarnation of God Vishnu, who is filled with love and compassion to everyone. This warmth and love in the heart like the mother gives to her child.
The Vishnu Granthi is operated by two major chakras: Anahata chakra and Vishuddha, but it is also associated with the three lower chakras: Muladhara, Svadhishthana and Manipur.

Rudra Granthi - the last major granthi, which blocks the sadhaka on the path to the tenth door, it also represents an obstacle for opening Ajna Chakra. Rudra Granthi keeps a person under the illusion of riddhi, psychic powers and materialism.
Only Guru is the key for opening this granthi. This knot is the most difficult to unknit because the various  apparent benefits of that granthi are so multiple that a man gets caught in the trap for a very long time. In general, various illusions caused by this granthi can be defined as:
• Attachment to worldly affairs and excessive desires of the material things
• Excess of possession
• Being in a blind vision of an illusory Maya, attachment to the ideas and concepts

In the process of the opening the granthi sadhaka may face serious obstacles, because he gains eight major Siddhis, Nava-Needhi (nine achievements), increasing the human ego. It is only when he becomes able to manage the ego and emotions, he reaches the opening of Ajna chakra. It is believed that, when this granthi is opened, the sadhaka is separated from the world of illusion and is associated with the kingdom of God-realization.
Posted by Yogi Lakshminath at 2:53 PM